Is there anything more wonderful than the smell of homemade bread, baking in the oven? To me, there’s nothing as delicious as a fresh loaf, warm and fragrant, sliced and spread thickly with strawberry jam or used to sop up hot soup.

There was a time, I suppose, when homemade bread was pretty run-of-the-mill, but that’s certainly no longer the case. I was lucky enough to grow up knowing what fresh bread tastes like. My dad was always the bread maker in our family, and he used to breakout an enormous metal bowl on the occasional Saturday and mix up a huge batch. He would stand at the kitchen table, working his magic, and I would watch, salivating at the thought of the crusty loaves that would result. We didn’t have any kind of mixer or bread maker (in fact, there was no electric egg beater in my house until I was well into elementary school), so he kneaded the great hulk of dough by hand, and it was a full-on workout. On those nights, we gorged on bread for dinner, maybe with a simple side salad, or scrambled eggs, or cheese, but mostly bread and butter and jam. Those were some of my favorite meals growing up, and still are.

Perhaps because of these fond memories, I’ve become a bread baker myself, and love trying new recipes and techniques. However, although I like remembering watching my dad make bread, I’m not so excited about the idea of devoting a Saturday morning to wrestling a ball of dough myself. So when I attended a class a few weekends ago based on the recipes in the book Artisan Bread in Five Minutes a Day!, I was very excited. I have many sandwich bread recipes that I use on a regular basis, but had not yet delved much into the world of crusty, artisan loaves. I had experimented a bit in the past—using the exact same technique described in this class, in fact—but had not been very impressed. I found the instructions confusing and too lengthy to read thoroughly, and I didn’t realize there was a way to make whole wheat versions. However, I was reinvigorated by this class. The teacher—a woman who goes to my church and isn’t a professional baker or anything like that—was so enthusiastic, that it was hard no to get excited. Plus, she brought amazingly delicious samples. The kicker, though, was a comment a friend made to me. She said she had substituted wheat flour in this recipe with great success. I had to give it a try.

The recipe that follows is a highly modified version of the recipe used in the class I attended. That recipe is itself a condensed version of the basic recipe from Artisan Bread in 5 Minutes a Day! I haven’t read the book, but may check it out one of these days to try out some of the other recipes. I think now that I have this down, I wouldn’t find it as overwhelming as I did the first time I was introduced to it.

The great thing about this technique is that it really is incredibly easy. And, there’s NO KNEADING involved. The version I’m giving you here is a savory, whole wheat bread that I based on the all-white flour basic recipe. It is garlicky and salty, and would go well with soup or used in a sandwich. I would not spread it with anything sweet. However, you can play a lot with what you put in. I’ve made it without any of the seasonings, and that makes a lovely, plain loaf, which would be great for sweet toppings, like jam or honey, and it makes dynamite French toast. Next I’d like to try adding raisins and walnuts. 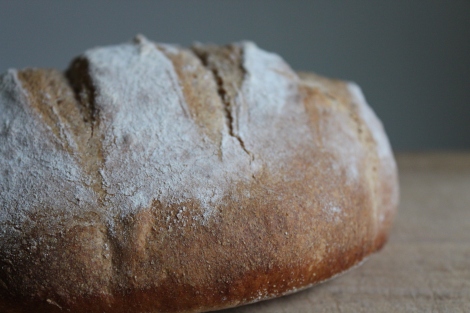 Here’s what the plain loaf looks like. If you make it like this, follow the directions below, but leave out the garlic, thyme, and sesame seeds. Instead of sprinkling the top with seeds, rub some all-purpose flour over it before cutting the slits.

My version also cuts out a lot of the details in the book, and any of the steps that seemed unnecessary to me. It also relies on equipment that I had on hand, instead of some of the things suggested in the book. I think you may also be able to leave this dough in the fridge for up to 24 hours, as the original master recipe states, but I would make sure to cover it with plastic wrap at some point, or the entire top of the dough will dry out. (This actually happened to me, and I just cut off the dry layer and proceeded as usual, so all is not lost if this happens to you.)

A note on equipment: you will need a pizza stone and a pizza peel to make this. A pizza peel is a board with a handle on the end that you use to slide the bread on to the hot pizza stone. I don’t actually have one, so I use a small cutting board with a handle. I hate to show it to you, as it doesn’t make a pretty picture, but it might help give you an idea of what you need:

Artisan Bread with Garlic and Thyme

This crusty loaf looks like it came out of a baker’s brick oven, and is so delicious, you won’t believe how easy it is to make. The garlic and thyme make it savory and interesting, and the wheat flour gives it a nutty, rustic taste. The sesame seeds toast in the oven and taste delicious against the soft, inside of the loaf.  Despite being 100% whole wheat, it’s moist and chewy and not overly dense. I love garlic, but if you like a milder flavor, use the smaller amount given. I think this is best served with a stew, for dipping, or alongside an Italian dish. I also love it in sandwiches.

7 responses to “Artisan Bread with Garlic and Thyme”