Even though my friend Minni just moved into her new apartment, I can tell it’s her home from the second I walk through the door: She stakes her claim via scent. Waves of sauteed red onion, toasted cumin seeds, and garam masala wash over me as I step in out of the cold and into the warm scents of India.

Minni greets me with a smile, wreathed in a bright fuschia sari that dangles elegantly from her arm and ripples softly behind her as she ushers me into the kitchen. I met Minni years ago, and almost immediately begged her to teach me to cook curry. I had recently discovered Indian food and was itching to learn an authentic recipe or two. With infinite patience and an unbelievable willingness to feed me, Minni has more than stepped up to the task, allowing me to watch her conjure up delicious sauces and flat breads and curries over and over again.

Born in Chandigarh, Minni moved around India with her family in her childhood, living in Bombay, Shimla, and then Bangalore. At each new locale, Minni’s mother would experiment with regional recipes and flavors,while Minni chopped vegetables, watched, and learned. To this day, although Minni is one of the finest cooks I know, she insists she lacks her mother’s culinary finesse. In fact, Minni never liked cooking when she was younger and says she didn’t learn until after she married. In 2004, after an arranged marriage, she moved to a small town in the United States, where the only place to get Indian food was her own kitchen. As a strict vegetarian (Minni is Hindu), there weren’t a lot of options for her even outside of Indian food, and cooking at home became a necessity.

Now, Minni cooks two meals a day from scratch, and I can attest that she’s a curry guru. Last week, she agreed to cook something for me, while I attempted to write down the recipe. As usual, she rose to the challenge, making not just one, but three Indian dishes. I’ve decided to split them into three posts, starting with Sabudana, and the promise of two other delicious creations to come. (Check back soon!) Here’s a sneak peek of what’s to come: 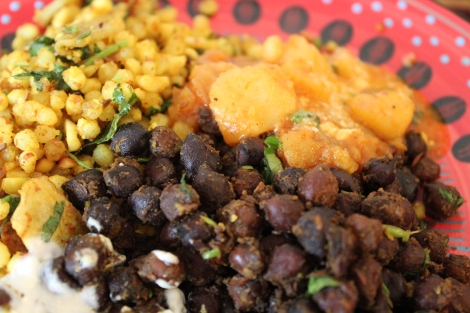 Because Minni does not measure when she cooks, all of the measurements below are the approximations we agreed on together as she worked. In general, instead of teaspoons and tablespoons, Minni uses a small metal spoon, along with a dish of round spice containers that stays perpetually on her counter, like an artist’s palette. And just like an artist, she doesn’t need to measure out each addition; instead she goes by sight and smell and taste. For the most part, she has no written recipes, so I scribbled and watched and questioned, and I think the result will lead to a very authentic replica of Minni’s dish.

Prior to my cooking lesson, Minni and I chatted on the phone about what dishes she might make. She suggested Sabudana, and explained it was a small white seed or ball. I couldn’t imagine what it could possibly be, and was a tad concerned it would be such an exotic ingredient that people would have a difficult time recreating this dish at home. When I arrived, she showed it to me, along with the package it had come in. I looked at it and laughed. Printed below the Indian name, in small type, it said “Tapioca”! So this should be a fairly easy dish for any of you to make, never fear.

Although I’ve always loved tapioca pudding, and grew up eating it, I would never have thought to make it into a savory dish. The combination here, though, is incredible. The peanuts give it a full, nutty crunch, the tapioca has a firmer and chewier texture than rice, and, of course, the spices infuse it with warmth and exoticism. As Minni will tell you, Indian cooking is all about the spices. The cardamom and turmeric lend an almost gentle sweetness that counters the pungent cumin and hot cayenne. This is excellent served with yogurt. Minni makes a bowlful from whole milk each day to serve with meals, but any  plain Greek or low-fat yogurt will suffice. This helps to mellow out the flavors, particularly if you use a lot of cayenne.

Now, I know some of you hate cilantro, and I used to be one of you. Actually, it was Minni’s cooking that converted me. Somehow, when cooked in a curry or other Indian dish, it takes on a totally different flavor. However, if you still can’t stand the thought of it, leave it out, and it will still be delightful.

(I can’t resist adding here that Julia Child also hated cilantro. Larry King asked her once if she would ever order it and she responded, “Never. I would pick it out if I saw it and throw it on the floor.” I think that has to be one of my all-time favorite food-related quotes. And here’s a great article on cilantro: “Cilantro Haters, It’s Not Your Fault.”)

The other ingredients should be fairly easy to find (see the headnotes for more on this), but here’s a picture of curry leaf, if it helps:

This unusual dish is highly flavorful, yet easy to make and simply delicious. The salty, fried potatoes and chewy tapioca absorb the aromatic combination of spices, all set off by the nutty flavor of minced peanuts. This is lovely as a side dish with a lentil or saucy tomato-based curry, but can also be served as an entrée with a green salad or other vegetables. I think it’s best served with some cool, plain yogurt, which balances the strong spices in the dish. You can make this as hot as you like by increasing the cayenne, but if you have a low heat tolerance, decrease or omit it all together. The amounts given here will yield a dish in the “medium” range; if you’re new to Indian or other spicy foods, I would tone it down. Some of these spices may be new to you, but it should be fairly easy to find almost all of them in a regular grocery store. The exceptions may be garam masala and, almost certainly, curry leaf. You can find these at an Indian specialty store, or order them online. If you absolutely can’t find the curry leaf, I would make this anyway, but the garam masala is fairly essential. You can use any type of shelled peanuts here, but Minni used the type that are usually labeled “Spanish Peanuts.” Lastly, make sure you use large tapioca pearls, not the small ones. 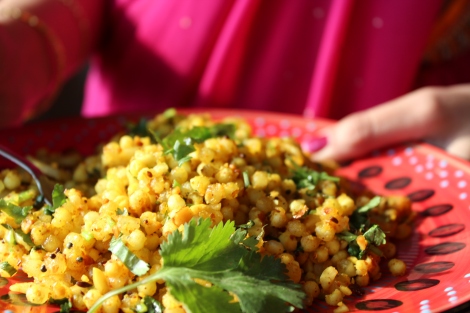 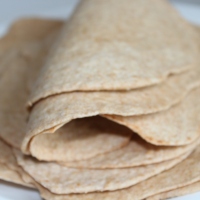