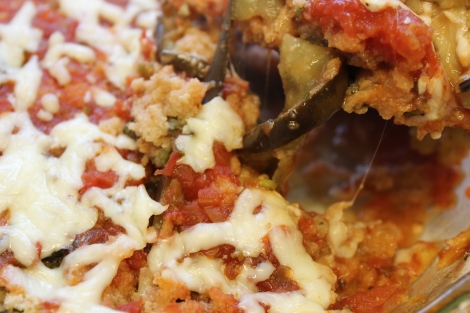 When I was nineteen, I got a job waiting tables in an Italian restaurant. I was home for the summer and pining away for my boyfriend (who I later married). It was a miserable job. I would get so nervous; once I even dropped a plate full of glasses. They shattered around the ankles of a couple tucked away in an alcove for what was supposed to be an intimate dinner. It did expose me to good Italian food, though, including eggplant parmigiana. I don’t know if I had ever even tasted eggplant before, but I guess it’s not surprising that I loved it, as it was deep-fat-fried and smothered in gooey cheese.

Years later, I wanted to recreate the taste of that dish without spending hours in the kitchen. I also wanted a higher vegetables-to-fat ratio than traditional eggplant parm.

This is the result. It does taste different than the traditional dish, largely because it doesn’t have the crunch from breaded and fried eggplant. It’s a bit more like a vegetable lasagna. It’s delicious, though. The eggplant slices become almost creamy after being broiled, with a touch of salt and olive oil on their slightly-singed exteriors. The bread crumbs give the dish heft, while the tomatoes lend sweetness and give it a saucy texture. I used mozzarella today, as I had a nice block in the fridge, but parmesan or feta would be equally lovely.

I couldn’t resist making this today, as I brought in the last of our eggplants from the rain this afternoon. I still have some basil and tomatoes out in the yard too, so it was the first thing that came to mind (even though, strictly speaking, I didn’t actually use any of my own tomatoes…) It’s a perfect fall dish, warming the house as it bakes and sending waves of garlic and basil through the kitchen and beyond. 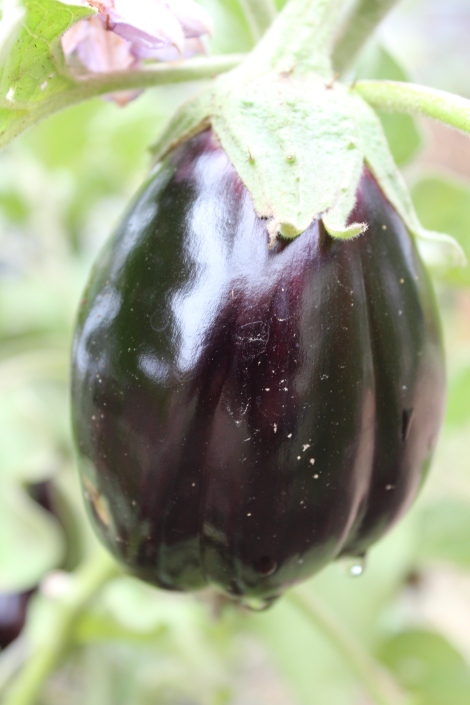 A lighter, easier version of the Italian classic, this dish combines salty eggplant slices with a sweet tomato sauce. Serve steaming hot, while the cheese is still melted on top. This is delicious by itself, but would also be fantastic on top of noodles. It would be particularly tasty with an accompaniment of spaghetti coated in fresh garlic sautéed in olive oil. I like to leave the skins on the eggplants when I make this, as I like their chewy texture, but if you like a more homogenous feel, peel them. 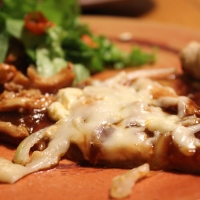